Salt in My Eyes

Posted on August 4, 2013 by lucindasrunningblog

Two weeks ago I completed my first 13.1—the Grand Manan Boys and Girls Club 10K and Half Marathon. I traveled to the island with Shoshannah White and Tonee Harbert—fabulous photographer/artist friends from Portland. Shoshannah was on the island for a post-residency exhibition at the Grand Manan Art Gallery, and we were all grateful to escape daily routines and immerse ourselves in a few days of art and running. 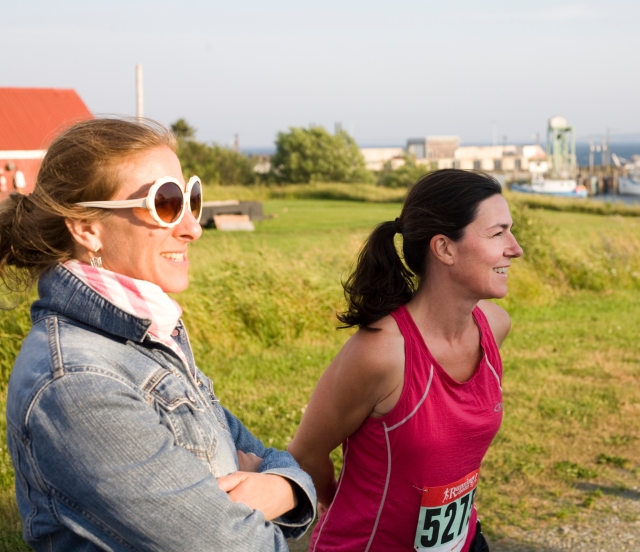 Waiting in the wind with Shoshannah

My grandmother Travilla bought a cottage on Grand Manan the 1950s, and the island–21 miles long, 11 miles wide, and sitting 22 miles from the mainland in the Bay of Fundy–never fails to feel like a retreat. Before European explorers “discovered” Grand Manan (beginning with the Norse), the island was used as a safe winter home for elderly Passamaquoddy, in addition to serving as a burial ground. Centuries later, the island became known for its fishing industry, particularly smoked herring and the practice of using weirs, which was adapted from Native American fishing practices. The process and history is described in a short article by the Gulf of Maine Research Institute: Seining Weirs and can also be seen in this vintage video from the 1970s: Whale Cove. Today, the island balances a quiet but growing tourist industry with the ongoing but unpredictable fishing business. This summer the herring are abundant, the weirs are being strung, and the island is buzzing with tales from the boats.

I’ve been spending time on Grand Manan since I was a child, and over the last several years, I’ve had some great road trips to the island with friends and family. Two years ago, I drove up with my sons, Link and Ray, to watch a friend run the quirky GMI half marathon. I’d just started running, had never taken part in a road race, and I watched with nervous excitement, remembering pre-race jitters from x-c skiing in high school. I never imagined that I’d run a race myself, much less a half marathon.

Two years later, on race day, I tried to pass the hours relaxing at the family cottage. The race was scheduled for 7:30 pm (P.M.!), so I did my best to stay cool and fresh throughout the day. I read, spent some time drawing, snacked, hydrated, and scanned the names of the people who’d signed up for the race. There were only a handful, but they included some accomplished distance runners. In the afternoon, looking for packet pick up, I ran into Brenda Guitard and Lois Zaat, who advised: “Don’t pay attention to time or pace goals; just have fun.” By race time, the temperature was moderate but the humidity was 94% and there was a strong headwind. These should have been cues to adjust my planned pace and to take the advice I’d been given! At the start, Guitard took off like a shot, leaning steeply into the wind. She eventually won the race in 1:35:11, seeming to easily machine through the 13.1 miles. 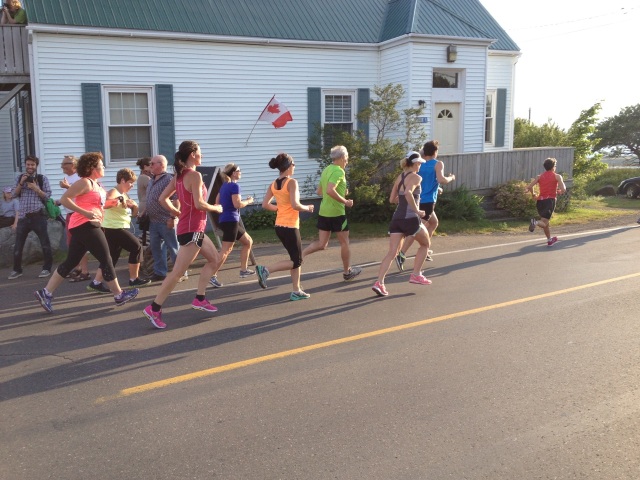 My plan had been to enjoy the first 6 miles–to keep a steady pace and then pick it up for the second 6, but the excitement got to me and I just couldn’t rein it in. I went out way too hard, and after a few miles, I was overheated.

I could feel the hot flush on my face and the salt in my eyes, which usually means a race is going to require me to dig extra deep. This one took all I had. At around 9 miles, the conditions had improved, but my calves started cramping. I slowed down and relaxed my legs by shifting and lengthening my stride until the cramping subsided. For the final twilight stretch, I focused on putting one leg in front of the other without tripping, thinking only of the finish line one long mile away. 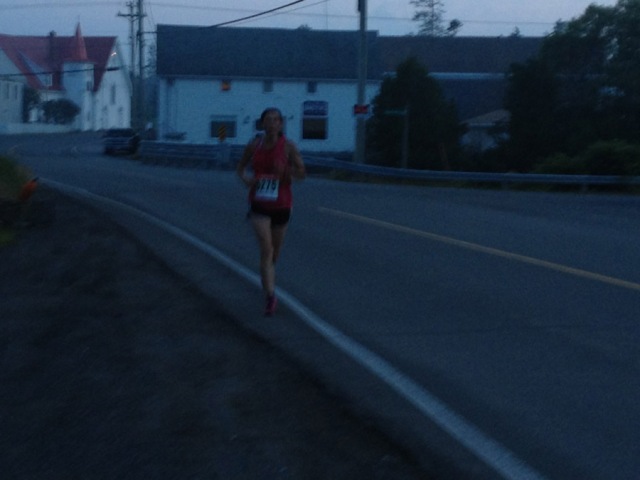 I finished 6th overall (out of 15) and 4th for the women, with a time of 1:54:46. I crossed the finish line with legs cramping and stomach churning. After pacing the parking lot, eating a banana, and hydrating with some Gatorade, I headed to Stanley’s Beach in North Head to soak my calves in the ice cold Bay of Fundy. Sho and Tonee had cooked a feast of burgers, potatoes, and salad, but when we got back to the cottage and sat down to celebrate, I managed only a few bites. My stomach wasn’t ready for nourishment. After a quick toast with Alexander Keith’s ales, I realized I was spent and would have to call it a night.

I woke up to a heat rash, sore throat, and stiff legs, but no real injuries. I’d trained well for my first long race and managed a decent time. I’d also made some key mistakes: going out too fast and not eating well the week before. Through the fall and winter I’ll be focusing on shorter races and building up my weekly miles. By next spring I’ll be ready to find another half marathon. I’ll be keeping my fingers crossed for cool, dry weather and the will to start nice and easy!

Lucinda is an artist and teacher whose work focused on landscape and place. Bliss currently serves as Dean of Graduate Studies at Massachusetts College of Art and Design
View all posts by lucindasrunningblog →
This entry was posted in Half Marathon, Running, Uncategorized and tagged Grand Manan, half marathon, ocean runs, racing, Running. Bookmark the permalink.

3 Responses to Salt in My Eyes