Posted on September 21, 2015 by lucindasrunningblog

After years of wanting to have a more extended, intentional stay in New York, I’ve rented a studio space in Bushwick for the month of September. Given the designated time and space, I’m finally making progress with a series of large-scale drawings that have been slow to arrive. Since I began exploring the intersection of art and running several years ago, first with the farm running and watershed work, then with the daily pattern grids, and now with a series of 4.5′ x 4.5′ mixed media drawings, the movement of my body around particular boundaries has been implicit in the linear marks on the page. My movements are echoed on the paper as I transcribe and translate GPS lines. The physicality is present in those marks, but as the work has moved away from figuration toward abstraction, I’ve been questioning the limited presence of the body, looking for its reemergence in a way that would maintain the enigmatic, not returning to the more direct narrative I’ve used in the past. As any artist or writer knows, having isolated the current “problem” in the work is a gift, and now that I’ve identified it, the work is progressing more quickly.

As these studio explorations continue, I’m adjusting to running in Brooklyn, finding that the persistent stoplights and rough pavement can make it hard to get into a rhythm. And there’s the tricky process of figuring out safety. What creates urban boundaries and how do I navigate them? How does a white, middle class, middle-aged woman do what she loves to do–run and explore–and do so with respect for the neighborhoods and communities that are rooted in this place? I did witness one incident of violence during my stay (a fatal shooting) and learned that the danger is in being in the wrong place at the wrong time–and that’s tough to predict. That experience was terrifying and will echo through me for a long time; still, in general, I have worried more about being disrespectful than about safety. Every day there seem to be more uber-hip, young, white, privileged men and women on the streets. Though that influx may be a sign of a neighborhood getting safer, it’s also the harbinger of less cultural, ethnic, and economic diversity and that’s also unsettling to witness.

Though the solitary running in Brooklyn has been interesting, I’ve missed running with my friends in Maine. With that in mind, I looked for a local club when I arrived and found the North Brooklyn Runners. The club has a weekly schedule of group runs and eager to join in, I set out one morning at dawn for Prospect Park, where the group was meeting for the Just South Wednesday Morning Run. At 6:30 on the button, 10 runners suddenly showed up. I was happy to see a low tech group (just a few watches and no ear buds). There was one other woman and the whole group looked fit and fast! As we took off onto the trails, the long line of runners quickly spread out and the front 6 or 7 disappeared into the woods. Four of us dropped behind, picking a more comfortable pace as the morning began to heat up. Lars, the group leader for the run, filled me in on the club and on Brooklyn running culture. He shares an interest in birds, so we took a few short breaks to seek out herons fishing for breakfast. 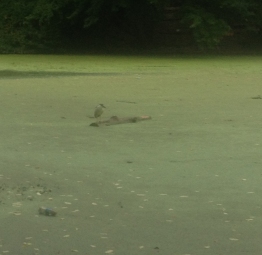 We finished in just under 5 miles, made tentative plans to join up for future runs, and scattered to jump into the day. I was happy to have my running world expand, and with my daily run complete by 7:30, I set off for Bushwick to get back to the drawings, my head filled with new maps and tales.

Lucinda is an artist and teacher whose work focused on landscape and place. Bliss currently serves as Dean of Graduate Studies at Massachusetts College of Art and Design
View all posts by lucindasrunningblog →
This entry was posted in Art, Running and tagged Art, birds, Bushwick, North Brooklyn Runners, Running. Bookmark the permalink.