Posted on January 8, 2013 by lucindasrunningblog 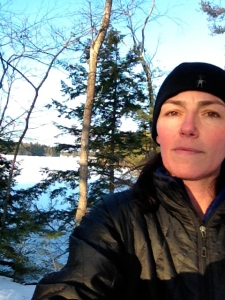 It’s a new year, and as I look back at the first eleven entries of my blog, it occurs to me that each post has rippled wonderfully into new adventures, side conversations, and tidbits of knowledge that have been gifted back to me in response. In one case, in response to “I’m Making Art Right Now,” Gregg, whom I quoted in the post, emailed me to recommend Haruki Murakami’s What I Talk About When I Talk About Running. Much of the book is devoted to tales about training, but the best parts are when the author offers a glimpse into his runner’s/writer’s mind. In one section, he describes the mental transformation that happens during a run:

I run in a void. Or maybe I should put it another way: I run in order to acquire a void. But as you might expect, an occasional thought will slip into this void. People’s minds can’t be a complete blank. Human beings’ emotions are not strong or consistent enough to sustain a vacuum. What I mean is, the kinds of thoughts and ideas that invade my emotions as I run remain subordinate to that void. Lacking content, they are just random thoughts that gather around that central void. (17)

I wouldn’t describe my experience when running as a void, but I do love the way ideas shift and bump into each other with ease after I’ve been running for a half hour or so. There’s a realignment that happens in the way ideas get knocked off their foundations, and I carry some piece of that forward into my post-run day. Perhaps my experience of unhinged ideas bumping into each other is similar to Murakami’s “void.” 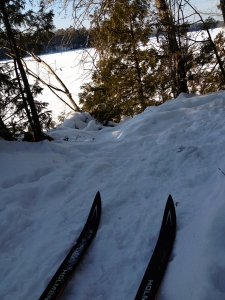 A few days ago, I rediscovered a section of the Sewall Woods Trail in Bath. I’ve had an awful head cold this week, and I’ve been swamped with the start of classes. Though the couch was tempting, I opted to get my blood pumping. I took the wooden skis out (a long term loan from a friend, for which I’m now even more grateful) and set out for the trailhead. I’m still getting my skiing legs back after a 20 + hiatus from X-C, and as I was gliding through the woods along the river, on trails packed with mountain bike and snowshoe tracks, I realized that since high school I’ve had a nonsensical preference for groomed trails. For some reason, I thought that the pace and excitement wouldn’t be the same in the wild or on sullied trails. I have no interest in tedious shuffling on skis! My assumption about trails, along with other assumptions about time and money, had stopped me from doing one of the things that brings me the most pleasure in life! On that late afternoon a few days ago, the woods were magical, and I was reminded again of how tunnel vision can be an obstacle to discovery, even to pleasure. Given the right match between skis, terrain, conditions, and the right wax, options for adventure, even pure joy, are abundant. In Sewall woods, I ran into a couple snowshoeing, a few mountain bikers, and a runner with her dogs. With each meeting, we shared a greeting and a look of recognition: why would anyone be anywhere but in the woods at this moment?!

A final note on gear. A few weeks ago, I purchased Sporthill 3sp Saga tights. They add just enough warmth for touring through the woods without being too heavy. They feel like soft cotton but they resist getting wet. Highly recommended.

Lucinda is an artist and teacher whose work focused on landscape and place. Bliss currently serves as Dean of Graduate Studies at Massachusetts College of Art and Design
View all posts by lucindasrunningblog →
This entry was posted in Uncategorized and tagged books, x-c ski gear, x-c skiing, x-c skiing gear. Bookmark the permalink.