Posted on June 12, 2013 by lucindasrunningblog

On Sunday, I completed my first farm run at Mitchell Ledge Farm in Freeport. Andy LeMaistre met me with a handful of printed maps, which I quickly realized would be essential to my navigation of the farm perimeter. A brief tour of the barn introduced me to the Registered Belted Galloways or “Belties.” Breeding these handsome cattle is the primary business of the farm. 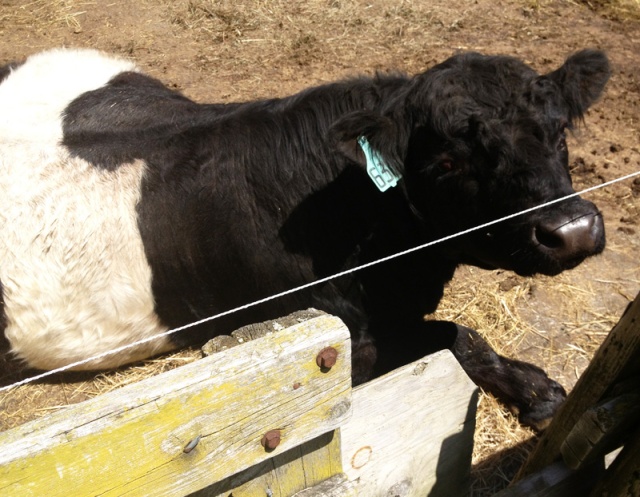 The barn smelled of hay, leather and antique tools—smells that brought back the barns and farmhouse sheds of my childhood in Northern Vermont. Barn swallows dipped above us, in and out of the open barn door. Andy pointed out the symbiotic exchange of safe nesting spot for a bug-free barn. As I prepared to head out on my adventure, I learned that due to a low number of cattle, many of the electric fences would be turned off.

Filled up with the smells, sights, and sounds of the farm, I set out along the road bordering the south side of the property. 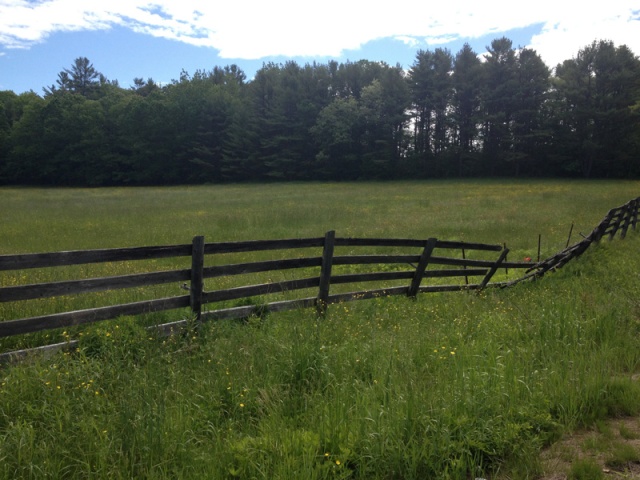 After making the first turn, I began to understand the complexities of the farm boundaries. It became difficult to distinguish between farmland, conservation land, land under development, and private property. It wasn’t clear where to cut into the woods to follow the farm’s edge, and I ended up running too far up the road. In retracing my steps, I ran into my first obstacle–one I’d anticipated but not prepared for: an aggressive dog. The canine ran out to the road road barking and growling. I jogged by ignoring it, but the dog pursued. I yelled, “Go Home!” which inspired only a brief pause in the assault. I ran across the road and climbed on to a neighbor’s porch, but the dog wouldn’t retreat. After a few minutes a car came down the road, and I scooted down the road while the car blocked the way. The dog stayed put in the road, barking and growling as I ran out of site.

I returned to the development and ran through the construction zone until I hit a path that the map indicated would lead back into the farm property.

The path quickly disappeared, so, keeping the sun on my right, I bushwhacked until I discovered what turned out to be little-used Freeport Conservation Trust pathways. These led me to the beautiful back field—my marker for the northeast corner of the farm. 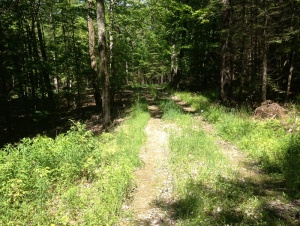 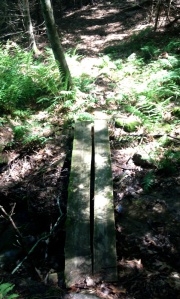 I followed the fence to the west side and took in the view.

From there, I got lost. I overestimated the distance of a  stretch of land on the northwest side of the property and ran into a number of private homes that weren’t on my maps. I retreated to the woods, not wanting to trespass or incite more dog wrath. To my surprise, I realized that the deeper I was in the woods, the safer I felt. It hadn’t taken long for me to feel completely at home on the land within the boundaries of the farm. After some exploring, I ended up along a dirt road with a number of homes. I followed the roads back to the farm, then ran up the path on the west side of the property, returning to the back field so I could see where I went wrong. When I returned to the barn, I cooled down and made friends with a few of the barnyard critters. I was exhausted and elated!

My aim is to complete this project in a way that doesn’t inconvenience hard-working farmers. I hope that they take some pleasure in the dialogue, or at least have a good laugh. As I pick up the phone to make each new connection, I’m ready for a range of reactions. So far, almost all of the conversations have been positive; however, even the negative responses have found their way into the studio:

Lucinda is an artist and teacher whose work focused on landscape and place. Bliss currently serves as Dean of Graduate Studies at Massachusetts College of Art and Design
View all posts by lucindasrunningblog →
This entry was posted in Art, Farmland, Running and tagged animals, Art, drawing, farming, Nature, Running, stories. Bookmark the permalink.