Keeping the Sun on My Right

Posted on November 20, 2013 by lucindasrunningblog

I left the Maine International Conference on the Arts inspired and ready for the next stop on my road trip: Grand Manan Island, where I had promised to close up the family cottage for the winter. I took the airline to Calais, then made my way up to Blacks Harbour to catch the last boat. The island was magic, as it always is, even when the days are spent catching up with work and packing dishes and sheets. I also managed a 10 mile run along the course of my first (and only) half marathon. When it was time to go, I caught the early boat, ordered a big breakfast, and finished it before the boat arced around Swallowtail Lighthouse. Then I scooted up on deck to watch the island fade into the morning light. 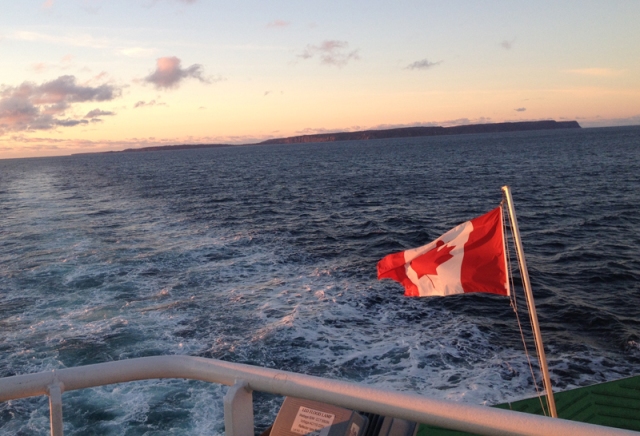 An hour and a half later, we reached the mainland and I set my sights on the last stop of my trip. At the MICA conference, I had arranged with my former student, Michelle,  to run her farm on my way back home.

As I stepped out of the car in Madison, Michelle shot out of the door with a big, bright smile and three barking, leaping Dutch Shepherds, her “shiny little bitches.” Michelle had just returned from her teaching job—an hour and a half commute each way. It was already afternoon, and given the diminishing daylight hours of fall, we headed off for a quick walking tour of the farm, joined by the elder statesman of the shepherd pack.

We worked out a map as we walked, in order to give me a few landmarks to follow during my run. The forest on Michelle’s land had previously been cut, so she said I should look for older growth trees to mark the end of her property. Other landmarks included a rock wall half subsumed by the forest floor and a swamp placed in a key location.

Michelle showed me around the barn, introducing me to the various critters.

She and her partner are working to breed belted Galloways with Jerseys in order to create a special cut of marbled meat. Thor, their Galloway bull, was strutting around the field outside the barn.  Chickens ran around freely, serving as “parasite control” for the pigs and cattle.

At the conference, Michelle had mentioned that their pregnant pig was due to give birth close to the day of my visit. A pig’s gestation is 3 months, 3 weeks, and 3 days, but Michelle wasn’t exactly sure which day her gigantic pig, Ruthie, had conceived. We found Ruthie still very pregnant, and looking more than ready to have those piglets. Michelle described the dangers of mother pigs mistakenly squishing their babies, a common occurrence with larger breeds which she was hoping to avoid. As we looked at pre-teen piglets from an earlier litter nearby, Michelle talked about the challenges of keeping the animals healthy and the cost of feeding them. Then she shared, “It’s hard to get used to killing them, after you doctor them.”

As we headed toward the back of the property, Michelle pointed out the remains of older projects, including a Christmas tree farm, and new ventures, such as raising Shitake and Oyster mushrooms in the woods, by embedding them, Japanese style, in birch logs.

Back at the house, I had some water, set my Garmin, and took off down the road. I cut into the woods before the next farm, having learned that it would be best to stick to Michelle’s side of the property line. It quickly became clear that  there were no trails to speak of, and that I would be using the sun as my guide. 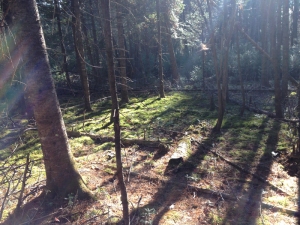 The woods were beautiful, but the land had been heavily used, and it was rough running. I repeatedly ran into downed trees, later learning that just after Michelle and her partner had moved in, a tornado had torn through the woods behind their farm, ripping up trees and flinging a grill, among other things, around the yard. Fortunately the animals remained safe and there was little damage beyond the destruction in the woods.

As I navigated my way around obstacles, I heard distant noises in the woods. Hunting season would open in a few days, and I imagined hunters setting up tree stands nearby. I was running north, hoping to find the stone wall, but there was no sign of it. I didn’t see the old growth forest either. I turned west, and after a brief stretch of clear running, I once again hit brush, toppled trees, and then swampland. The swamp was, I thought,  a good sign, as it indicated the far corner of the property. 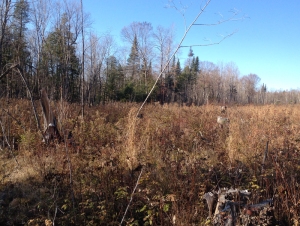 I managed to make my way across, to look for the power lines that would lead me back to the road. No luck–it was the wrong swamp. The sun was dipping lower, and I had a moment of disorientation as I questioned whether I had my sun/farm orientation correct. Heading south, I tore my way through a patch of brambles and brush pine, and at one point, looking down at my scratched up legs and the impenetrable forest in front of me, I realized that I would have to revisit my mapping process! 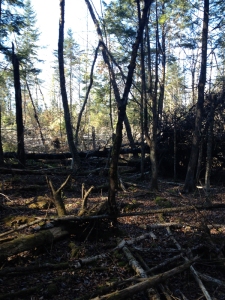 After making my way through another patch of rough terrain, I found a second swamp, beyond which I saw the power lines. Hoping they were the right ones, I put the sun on my right and picked up the pace. After a half mile or so, I saw evidence of regular woods traffic and realized this was probably the primary hunters’ route into the woods. I was ready to see that road! After another 10 minutes, I stepped onto the pavement. I  took a deep breath, and ran the short stretch back to the farm.

Michelle was happy to see me. She’d called up the neighbor while I was running to give the heads up that I might be entering the woods near their house. The neighbor responded with some alarm: “It’s two days till hunting season! You shouldn’t even be walking around the back of your own property!” I determined that I would do no more woods running anywhere near hunting season. In fact, for the next farm run, I would stick to fields and roads. In the kitchen, I gulped a large mason jar of water, and Michelle showed me her lavender plants. 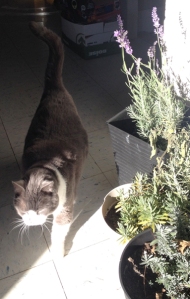 As I thanked her and turned to leave, she handed me a bag filled with homemade lavender soap. I put the sudsy wonders to work when I arrived home a few hours later. I was exhausted, covered with scratches and ready to collapse. I was elated and completely spent.

Lucinda is an artist and teacher whose work focused on landscape and place. Bliss currently serves as Dean of Graduate Studies at Massachusetts College of Art and Design
View all posts by lucindasrunningblog →
This entry was posted in Art, Farmland, Running, Uncategorized and tagged animals, Art, drawing, farming, Grand Manan, Maine Conference on the Arts, Nature, Running. Bookmark the permalink.

5 Responses to Keeping the Sun on My Right