The Runner’s Glance in Paris

Posted on November 18, 2015 by lucindasrunningblog

the Louvre, flag at Half Staff

Things in Paris have changed since I wrote a few days ago, since the attacks of November 13th. Though Parisians and foreigners are once again out eating, shopping, working, going to school, and visiting tourist sites, there’s an undercurrent of tension. On the Metro, waiting to cross a busy street, sitting in cafes, one spots stunned, introspective looks; nervous glances; weepy eyes; and we all scope out one another’s hands and bags for anything threatening.

The day after the attacks, everyone was advised to stay inside, and other than a quick trip out for food, we hunkered down in the hotel watching the news 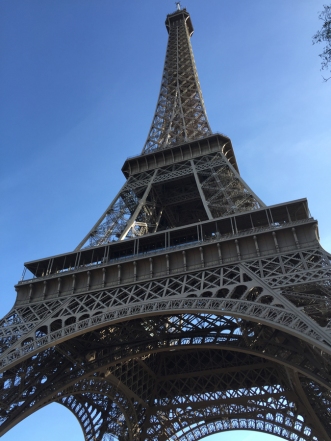 . On day 2, people began to venture out, and I decided it was time to take a run and get a feel for state of the city. I left the hotel and made an 8-mile lollipop loop from the Latin Quarter to the Eiffel Tower, along the Seine, and back down by the Luxembourg Gardens. It felt good to see other runners out there and to share that runner’s glance as we crossed paths.  Those of us who made it out that morning, offered nods of acknowledgement as we passed: Yup, I’m out here too–pretty friggin’ scary but it feels good! 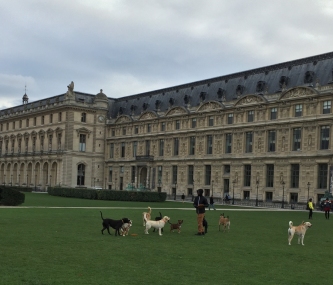 On Monday afternoon, I ventured out with my mother to visit the Louvre, which, after three days closed for mourning (and security) had opened its doors. We waited in line as police and military with machine guns, fingers on triggers, strolled back and forth around us. The lines were huge, and organized in a big snaking coral. We’d been advised not to linger in large crowds but decided to queue up anyway, and spent an hour among the hushed crowd, inching toward the door. After making our way through security, the grand Louvre opened up before us. We spent the entire afternoon wandering through the museum, starting with the seemingly endless halls of paintings, stopping to linger in front of favorites. I could have spent all day in front of Vermeer’s  Lacemaker of 1670; the piece is so perfect, it’s hard for the eyes to get enough of it. I was also struck by one of the temporary exhibits, A Brief History of the Future, a show based on Jacques Attali’s book of the same name. It’s claimed as a “pluridisciplinary” exhibit and is brilliantly curated by Dominique de Font-Réaulx, Jean de Loisy, and Sandra Adam-Couralet. The theme of the show was the glue, and the curators cohesively combined works as disparate as Sumerian cuneiform, Thomas Cole’s Course of Empire cycle, Raoul Hausmann’s Mechanical Head: Spirit of Our Time (one of my favorite dada assemblages), and Foundation, an installation by contemporary Chinese artist Ai Weiwei, among many others. It’s a timely and poetic show, its concerns amplified by the events of November 13th and its tentatively hopeful message much needed.

Social media has been a source of love and strength during the last 4 days in Paris, and I’ve felt immense gratitude for the presence of my wide flung community of artists, runners, friends, and colleagues. It’s also been interesting to see the critical discourse emerging on the web. Though it’s heartening to see the engagement, I think it’s important to note that an expression of compassion for France does not, in my view, imply indifference to Beirut, and it certainly doesn’t indicate full alignment with the values expressed by the governments of the Western world or a lack of awareness of their complicity in the emergence of violent extremist ideologies in Syria. It also doesn’t mean that similar violence elsewhere is made invisible; actually, from where I sit, coverage of the French attacks seems to be shining a broader beam of light, which is thankfully beginning to illuminate the dark webs that link the global attacks, making clearer connections to the Syrian refugee crisis and to the role of climate change in the escalation of terror and war. I’d close with a note of thanks for those articulating the complex and difficult truths about the current state of the world and also to those sending messages of solidarity and compassion to France.

5 Responses to The Runner’s Glance in Paris