Posted on November 12, 2018 by lucindasrunningblog

Three weeks ago, I ran the Ashworth Awards Baystate

Marathon, my first 26.2! I started running 8 years ago, and it’s become a big enough part of my life that people constantly ask, “Have you run a marathon?” Until the last year, I wasn’t seriously considering it. I’ve never been sure I wanted to take on the distance, in part because my professional life is so busy, but I was also insecure about whether I’d be up to it. I was a competitive x-c skier as a teen-ager, and though I loved it, the stress of those races lingered and gave me some trepidation about racing in any sport. I got over that after my first running race (the 2011 Portland Thanksgiving Day 4-miler); still, a marathon always seemed like a huge leap. Eventually, I realized that running is a big enough part of my life that the marathon was symbolically important.

Over the last year, I hemmed and hawed about which race to do, but finally chose Baystate, which a number of people recommended as a good first. It’s a relatively flat course, with just enough variation that no single muscle group is hammered throughout. Many people told me that getting to the starting line of your first marathon is an accomplishment in and of itself; in other words, it’s common to get injured through carelessness or overtraining. I had my first half marathon in the back of my mind, a race on Grand Manan Island which I took on shortly after I’d started running. It was a disaster. I wasn’t ready, hadn’t fully trained for it, went out too fast, and basically suffered for 11 miles out of the 13.1. I’ve had successful half marathons in the years since then, with a PR of 1:46, but I knew that the lessons I’d learned in that first experience would apply tenfold to the marathon.

Once I made the decision to do Baystate, I had to learn how to train for a longer race. By mid-summer, I had a pretty deep base of fitness. I’d finished the USATF northeastern mountain running series, including the epic Mount Washington road race. Still, I’d never run over 15 miles, and had only done that twice. I knew there was a risk in upping my mileage, if I wanted to get to the starting line healthy. Much of my training was done on the trails, where I focused on time rather than distance, getting a few 4+ hour runs in the books. Eventually, I finished two 20-mile training runs on the road. I put a few fall races in the mix–a 4-miler and the 12 mile Squam Ridge Race–in order to get myself into the racing head space. My weekly mileage was between 40 and 50 miles at that point, but due to the trail focus, I had several weeks with 7-8 hours logged.

Three weeks before the race, I began to taper, which, after the months of upping the mileage, was extremely tough. It felt counter-intuitive to begin to rest the body in preparation for a race. As the big day got closer, I was increasingly nervous, but I channeled the nerves into planning the nuts and bolts. I asked for advice wherever I could, and got coaching from running sage, Rick Chalmers. In the week before the race, we used recent races, along with my weekly mileage and hours, to determine three possible approaches to the marathon. The choice set before me:

1. Go out at 9:20s and run a relaxed marathon, approaching it like a long run.
2. Find the max pace that I think my body could sustain for 26.2 miles (I figured around an 8:55) and go for something close to a 3:50.
3. Choose a pace that would be push me but be more likely to give me a good experience.

I was determined to enjoy my first marathon and I wanted to challenge myself, so I opted for choice #3 and established a goal pace of 9:08s. For years, I’ve wanted to experience a sense of control in a race, from start to finish, rather than entering survival mode in the home stretch.  Throughout my training, endless numbers of people told me about THE WALL that I would doubtless hit at mile 20, where leg cramps and lethargy would take over. I also heard tales of running careers ending because of marathon injuries. I was determined that would not be my experience. The week before the race, I hydrated  and ate lots of simple carbs (3 big meals a day, with snacks in between). I focused on mental preparation. I kept my legs up as much as possible and did my best to avoid high stress at work. I’ve noticed that intense stress translates directly to having leaden legs and zero race mojo.  The night before the big day, I ate a big plate of pasta puttanesca (no garlic), steamed beets, and a beer, to calm the nerves.

On race morning, I got up at 5:00 and made myself eat a bowl of oatmeal, leaving enough time to digest before the 8:00 start. After making my way to Lowell and lining up with the other runners, I was in the moment–as ready as I could be and excited to just have the experience. As we waited for the starting gun, I asked the 4:00 hour pacer what she was planning to do. She said she’d go out at a 9:00 min/mile pace and stick to it. That gave me a little jolt, as that’s more like a 3:55 finish time. I decided to stick to my own pacing.

The Baystate Marathon draws one of the fastest fields of any marathon; it’s a fast course with speedy runners. The average marathon pace (all ages, genders, and locations) is something around 4:40, but the average for Baystate is closer to 3:50! One gets the sense that, as advertised, the event is created by runners for runners, and it’s got a great vibe. In spite of the fast crowd, I felt thoroughly welcomed and supported as someone running in the middle of the pack. It was all I could do to keep the tears at bay every time I crossed a bridge where the enthusiastic crowds were gathered. At the half marathon point, some of my friends and Maine Road Hag teammates had lined up to cheer, and that gave me an extra boost for the second half! 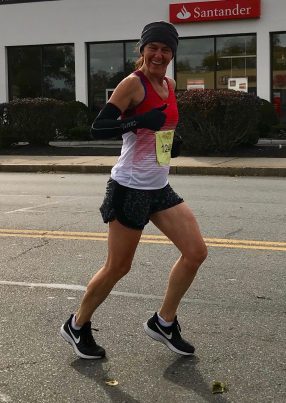 I started the race with a 9:16 for my first mile, taking it easy up an initial hill, determined not to go out too fast and to use every hill, even the first, as a rest opportunity. Quite a few runners passed me in the first 6 miles, but after that, holding to my pace, I passed runners steadily till the end. At the finish a young woman bolted by me, but I certainly wasn’t going to take the bait on that and cramp up in the final stretch. My pace varied between an 8:49 and a 9:24 throughout the race. There were some serious stretches of wind, and my splits reflect that. Around mile 16 the gusts were so strong that a 5-foot section of tree fell down quite a distance, hitting the pavement in the 20 or so feet between me and the runners ahead. The wind kicked up from the other direction right around mile 24-25, as I was nearing the finish. When I was done, my Garmin said 9:08s for 26.48 miles! For the official timing, I ran 26.2 in a 4:01:38 (net time). The most satisfying aspect of the race was not having experienced the wall that I’d been warned about. The pace for my final mile was an 8:55, faster than my first. I had a tight right knee for the last few miles and was ready to see the end, but I still felt like I was managing my body. As I crossed the finish and they passed me a medal, tears came to my eyes. I’d been training for months, and so much mental energy and self-doubt had preceded the race. I was filled up with the scale of it. I learned so much about running and about my body’s abilities at Baystate–every run I’ve done since the marathon feels different. I have a new confidence and a different understanding of the mind-body relationship. The experience was a complete treasure, and I’ll never forget it!

I’ll close with a note of gratitude to the generosity of the running community. A group of friends had also run the marathon that day, including Spencer McElwain (3rd with a 2:30) and Adam Goode (19th with a 2:41). They stuck around for an extra hour and a half , joining others who had come down from Maine to spectate, and they all cheered me across the finish.  The generous heart of runners never fails to move me–that some of the fastest people in the field can celebrate the accomplishments of runners of all ages, sizes, and abilities. It’s a beautiful thing.

Knowing that my friends had been freezing for 4 hours, I didn’t bother to check the results before heading out for lunch. When I looked that night, I noticed a BQ next to my name! I hadn’t put it together that I’d be qualifying for my next age group, in 2020. The Boston Qualifying times were all reduced by 5 minutes this year, so I hadn’t even considered that I might make the cut. At first, it looked like I was the last BQ in the entire race, but as it turns out there were some recording adjustments made later in the night and there were a good number after me. Looks like I have a few more marathons in my future!  I look forward to trying another 26.2, cranking it up just a notch or two, and trying to remember everything I learned at Baystate.

Lucinda is an artist and teacher whose work focused on landscape and place. Bliss currently serves as Dean of Graduate Studies at Massachusetts College of Art and Design
View all posts by lucindasrunningblog →
This entry was posted in Marathon, Racing, Running, Trail Running, Uncategorized and tagged Ashworth Awards Baystate Marathon, racing, Running. Bookmark the permalink.