Posted on January 31, 2013 by lucindasrunningblog 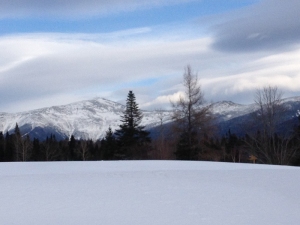 Last weekend I traveled to Bretton Woods, NH for NENSA’s 12th Annual NE Women’s XC Day. I learned about the event from my mother’s first cousin, Sally Howe, an avid athlete in her 60s who volunteers as one of the instructors. I walked in the door on Saturday, nervous and excited, only to find my KUA high school ski coach, Anne Donaghy, standing inside! Anne remembered me with, “Cindy Williams! You skied with me around ’83, right?” It turns out that she’s one of the event organizers. This was my first re-connection with the wider world of x-c skiing, and bumping into the woman who, along with her husband John, taught me how to race seemed like a significant beginning.

On Sunday, I started out in an Uphill/Downhill Classic clinic with Trina Hosmer. Trina was on the first U.S. Women’s Olympic x-c Ski Team in 1972, and she still competes (and wins) as a Masters racer. After a few hours of hill drills, I left with arms like rubber and some key tips: keep my head up on the hills and don’t stiffen up on the flats. At the end of the day, after the final waxing demo, I learned that Trina had referred to me as a “very good skier–old fashioned, but very good.” I’ve been crunching away on “old fashioned” ever since. This wasn’t the first time I’d heard it; my skiing/running friend Rick tells me that I’m the Rip van Winkle of x-c skiing. I skied in the late ’70s and early ’80s then essentially stopped for 25+ years. I learned to ski before start-to-finish skate skiing took off in the mid-80s, which probably explains my old fashioned style.

For the afternoon session, I took a skating clinic. It was my first time on skate skis, and I learned basic V1 and V2. It felt pretty awkward at first, but after 20 minutes or so, the rhythm came pretty easily. I’m hoping for some decent snow so I can give it another shot.

The key speaker for the NENSA event was Lea Davison, an Olympic Mountain Biker whose winter training is built around x-c skiing. Lea shared a bit about her experience in London last summer. In a cyclingdirt interview, she talks about her Olympic race: cyclingdirt interview. For our gathering of over 200 women, she gave an entertaining insider’s view of the Olympic experience. I was surprised to hear that the first step after making the Olympic team was to fly South for media training. After that, Lea was flown to Washington DC to meet President Obama, first lady Michelle, Vice President Joe Biden, and the other Olympians, including Michael Phelps (who leaned across the buffet table to ask Lea  about an eggplant dish). She spoke about hearing jets flying over the Olympic Village, then realizing that the sound was the cheering from the Track & Field stadium! Perhaps the oddest scoop was that there was a McDonalds in the Olympic village, which always had a line.

The weekend did leave me with a gear question. As my miles go up in running and skiing, I’ve been contemplating hydration. Over the weekend, I was thinking a small Camelbak pack might be a necessary piece of gear. On reflection, I think it would work for skiing, but for running, it lands in the same category as arm warmers: ridiculous for anyone but the elites. For now, I’ll eat snow and stash water bottles. Still pondering the pack for x-c.

Lucinda is an artist and teacher whose work focused on landscape and place. Bliss currently serves as Dean of Graduate Studies at Massachusetts College of Art and Design
View all posts by lucindasrunningblog →
This entry was posted in Uncategorized and tagged x-c ski gear, x-c skiing. Bookmark the permalink.