Posted on February 23, 2013 by lucindasrunningblog 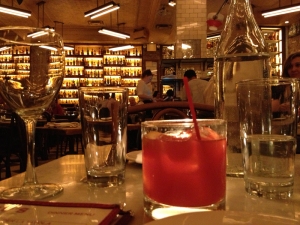 At Pulino’s with the lovely Amy R

The CAA Conference at the Hilton

I spent last week at the College Art Association conference in NYC. The take away from the week was a new awareness of how inspiration takes root when different parts of my life intersect. The week was rich: feasting with friends, making new connections, formally presenting my thoughts on online education in the fine arts, taking in some fabulous (and some tedious) lectures, and making time for city running. In the next few blog posts, I’ll share snippets about the experience.

Let’s start with running. My hip issue is resolved and my strength is coming back–it’s fun to run again! My second run in Central Park was one of those dreamy runs that lingers in the imagination. The temp was in the high 40s, and the paths were filled with that entertaining NYC mix of serious runners in training; inexperienced, heavily outfitted runners; shuffling joggers; fast walkers; and the hard working, fun loving runners. The conference was in midtown, and from 59th street, the park road arcs toward the east side. One can run the east side bend, head around the reservoir,  and run back down to midtown on the west side. It’s a nice 5-mile lollipop loop from the hotel and provided just the break I needed after 4 days in conference chairs.

Enlivened from an hour in the park, I was ready to head into a final conference panel: the Visual Culture Caucus’ “Life’s Edge: A Thinking-Feeling Lab in the Risks, Powers, and Possibilities of Forms-of-Life,” which included a presentation by my grad school professor, Steve Kurtz. Kurtz was in the press quite a bit from 2004-8, when he became a “bioterrorism” suspect in a strange and horrifying chain of events in which life, art, and tragedy collided. The story is discussed in this interview with Amy Goodman: Steve Kurtz Interview. At the conference, with all of this trauma in his past, Steve was his sharp and entertaining self, discussing his recent piece with Critical Art Ensemble, “Winning Hearts and Minds.” Having a quick visit with Steve was the perfect conclusion to the week’s work.

I spent Saturday night relaxing with friends on the upper West side, and before hitting the road for Maine on Sunday, I took off down the Riverside Park path for a morning run. The weather was turning, and the biting cold and a brisk wind made me wish I’d packed gloves and a hat. I forged ahead with frost tipped ears, and found the park scattered with runners, bikers, and clusters of dog walkers. Around the 79th street boat mooring, the trail led me through an abandoned gazebo and under the highway through a construction zone. I was the only one on the path for a half mile, and as my spidey sensors tingled, I wondered about the strange patterns of recreation in NY, noting how much things have changed since I lived there in the late 80s–I would never have run that stretch back then.

On the drive home, reflecting on the trip, I pondered once again how mental clutter diminishes with each mile I run, and how in the absence of clutter, a space is cleared for new ideas to form. In New York, I realized that a new body of studio work is emerging—mixed media, performative, and generated out of the intersection of my running practice and my studio practice. I’ll keep you posted.

Lucinda is an artist and teacher whose work focused on landscape and place. Bliss currently serves as Dean of Graduate Studies at Massachusetts College of Art and Design
View all posts by lucindasrunningblog →
This entry was posted in Uncategorized and tagged Art, New York City, Running, teaching. Bookmark the permalink.