Posted on January 18, 2017 by lucindasrunningblog

Opportunity has taken many forms this last year, and time for writing has been scarce! I’ve been fully absorbed in preparing for an exhibition that opens tomorrow, (January 19th, 2017) at Common Street Arts in Waterville, Maine. This exhibition is a book-end of sorts, concluding the year of grant-supported research and exploration (gratitude to SPACE Gallery for providing support for Tracking the Border through the Kindling Fund). There will be more written reflection to come, and the border work will continue through 2017; in the meantime, I’d like to offer a virtual introduction to the work in the exhibit.

The dialogues with my collaborators show up most literally in the 10 mixed media drawings in the show. Lousewort and Bedrock 1, for example, references bedrock geology maps of Maine, which I was introduced to by geologist, Chris Dorion. Since distinguishing between natural and artificial borders was of primary interest to me, the consideration of geology was essential. The St. John River is an obvious natural border, in contrast, for example, with the slash, which is a literal cut through the forest that delineates the national divide. As I researched the river, I learned about Furbish’s Lousewort, the perennial herb represented in the Lousewort and Bedrock drawings. The endangered plant, with its modest flower, is difficult to find. It exists on the US and Canadian sides of the St. John river, and its habitat requires the scrape of ice along the river banks as the seasons shift. This seasonal freeze and thaw, and its relationship to the flow of the river, keeps the banks clear of shrubs so the plant can flourish. 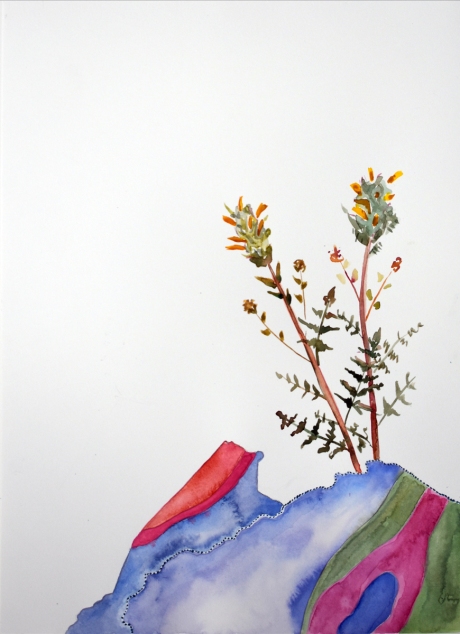 Borders over Pie: Passamaquoddy Bay reflects a conversation over pie with Newell Lewey, a Passamaquoddy Native, and Francesco Cantu (Paco), a former border patrol officer and writer from Arizona. Speaking from very different border experiences, Newell and Paco shared some of their perspectives. My drawing and redrawing of Passamaquoddy Bay in this piece creates a shifting border line, signifying my interpretation of Newell’s feeling about the national border: “It’s a white Thing.” He was raised with a more traditional Passamaquoddy understanding of the land, where the tribal community would relocate based on sustenance, moving for deer or fish, for example, as the availability of different resources shifted location.

The rough-hewn frames for these drawings are hand crafted from  Northern White Cedar, which was milled near Pembroke, Maine. 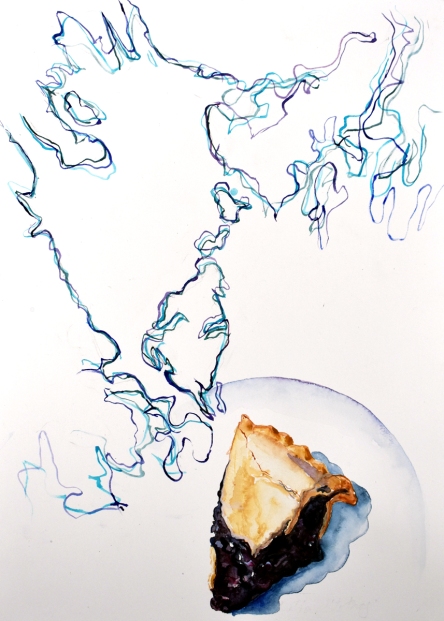 As the work for the border project developed, I began looking for ways to bring the physicality of my process more powerfully to the work. My drawings from the last 5 years have grown out of the intersection of my life as a runner and an artist, and I wanted to experiment with different strategies for bringing the tactile experience of my body more emphatically to the finished pieces. This first emerged in three site-specific Border Walls. These installations are documented in a slide show in the exhibition (most images by photographer, Peter Cunningham). I wanted to play with the idea of marking natural borders, taking time and energy to build these nonsensical borders, which I could then easily walk across or through. In the first border wall, for example, I marked the line in the intertidal zone where rockweed begins to grow. After a day of building, I stepped across the wall, and then let the ocean, over subsequent months, re-sort the stones across the beach.

The border project led me to desolate areas of wilderness, such as my navigation 7 miles into logging woods in Coburn-Gore in an attempt to view the “slash.” I was often alone in the woods, in some cases acutely aware of my vulnerability. I began thinking about personal borders and boundaries, re-focusing on what gender and identity have to do with my project. These questions became increasingly important as the misogyny in the US political discourse became more overt and offensive. In thinking about site specificity and the landscape, I reconsidered land artists Robert Smithson and Richard Long, as well as key feminist artists including Ana Mendieta and Carolee Schneemann, who so powerfully embodied issues of gender and identity in their performance work. I became interested in questions of representation, wondering if there is a way to shoot the female nude in nature in the current cultural moment, without simply creating a window for the gaze that echoes the history of the female nude in the landscape. The series of 12 archival photographic prints live (earnest and chuckling) in the gray area of this question. In terms of process, I shot nudes portraits on the border, printed them, hand altered the prints, mounted the altered prints back in the landscape, then printed the photo of the original photo on location.

The CSA exhibit includes additional works, including Green Blazes, a window installation of trees upholstered in black velvet, as well as mixed media pieces, Artifacts and hand altered photos, which offer a glimpse into my process over the last year.

As I suggested in an earlier post, I had imagined my border exploration as a chronological march from West to East along the Maine-Canada divide, but I quickly realized that my navigation should be led by the conversations with my collaborators. I also realized that each dialogue was going to lead to many others. I decided to scrap chronology and simply jump from point to point around the border, tracking the narratives that emerged out of each dialogue, and letting each conversation expand as far as I could track it. The imagery in the work was drawn from my experiences along the way. The conversations and the work will continue.

Lucinda is an artist and teacher whose work focused on landscape and place. Bliss currently serves as Dean of Graduate Studies at Massachusetts College of Art and Design
View all posts by lucindasrunningblog →
This entry was posted in Art, Borders, Maine, Running, Uncategorized and tagged Art, Common Street Arts, drawing, Gender and Identity, Photography. Bookmark the permalink.