An Escape and a Sharpening

Posted on February 1, 2017 by lucindasrunningblog

A challenging race is a mind and body recalibration, and after this last year, with

multiple new jobs, border running, a solo exhibition, and the holidays, not to mention the excruciating political season, I was overdue for a re-tuning. Taking the body to its physical limits strips everything else away; it’s an escape but also a sharpening. After wrapping up the NHIA MFA residency in mid-January, I flew out to Tucson with my son for a family visit. I like to look for destination races when I’m traveling, and if there’s something interesting, I fit it in. With a quick web search, I found a new ultra-trail running series in Oracle, and I signed up for the half-marathon.

On the morning of the race, I woke up in the dark, forced some oatmeal down, and hopped into the car with my mother to make our way up to Oracle, about 45 minutes from the Tucson foothills.  A few miles from the park, we made a Circle-K pit stop. It was 6:45 a.m., and the place was hopping with runners and hunters–the runners on route to experience the wildlife refuge and the hunters heading elsewhere to “cull coyotes.” We made our way to the Justice Court and picked up the shuttle to Oracle State Park. The park covers 4,000-acres in the Catalina Mountains, and serves both as a wildlife refuge and as a center for environmental education (watershed, geology, topography, wildlife, etc.). We scrambled out of the van, breath in frozen clouds. Organizers were just starting a fire and had an outdoor propane heater cranking.  I quickly picked up my timing chip and headed for the warmth. My fingers were already turning white with Raynaud’s syndrome, and I held them out to absorb the heat. The welcoming fire, with a big stack of wood that would last through the day, was the first sign that this would be an organized event, and it was, from start to finish. 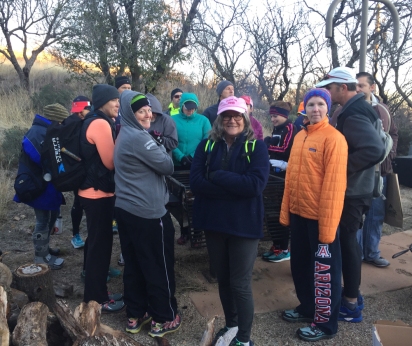 As the sun rose, Mom and I chatted around the fire. Most runners were layered up, but I stripped down to ¾ length tights, ankle socks (for cholla and prickly pear defense), a light tech t-shirt, arm warmers, gloves, and a lightweight hat. This turned out to be perfect–adaptable as the sun started heating up the more exposed stretches of desert. I took off for a quick warm up, then to the road to gather with the other racers. The ultra series was sold out at 300 runners (10K, half, 50k, and 50 mile), and there were about 100 clustered on the road for the half.

On GO, the mass of us started down the blacktop toward the trail head. After about 20 yards, we ran single file onto a trail overhung with mesquite trees and juniper bushes. I passed a handful of people when I could, and ended up locked in with a group of 5, three women in front of me and two men behind. I was worried that the hilly course and technical footing would wipe me out, and I was happy to find a race posse that would rein in my early pace. The five of us chatted—each of us using the conversational pace both as a strategy and to pass the time. About a mile in we came over a rise and down into a frost-licked dip. At the base, I noticed a set of huge cat prints in damp sand. “Fresh tracks!” said one of the guys behind me.

He chuckled, “That was a puma!”

A little further in we saw javelina tracks, then smaller cat prints, and scat was visible along the trail throughout the race. It was a lively desert refuge, and clearly the path was convenient for all species!

The course was hilly from start to finish except for a few stretches in the middle and one near the end. A few miles in, the pace was still comfortable, and I pondered whether to pass and pick it up. Given the challenging trail, I decided to just hunker down and reassess in a few miles. The terrain changed frequently, and it was pretty hard to find a groove. I’ve only run one Southwestern trail race (the McDowell Mountain frenzy in 2013), and I fell forward hard in the last mile of that 10-miler. Since these trails were slippery with frost, mud, sand, pebbles, and  diagonal rock waterbars–even one patch of snow–I stayed hyper-focused on placing my feet and not letting the growing aches in my legs make me sloppy. On the longer climbs, everyone in sight walked with quick steps, and I followed suit, trusting the more experienced trail racers.

About 4 miles in, we were on a grassy open plain, The trail had turned from dense cacti, creosote bushes, and palo verde to gorgeous grassland—golden light stretching out in all directions. One of the guys in back passed and took off. I followed  his lead, a bit slower, passing 2 of the 3 women in front of me and locking in behind the leader of our pack.  We ran together for a mile or so. She said I was helping to push her pace, but when we came to a relatively straight downhill stretch, I decided to pass and let the hill carry me down. I like to let it rip down the hills, though I’m guessing that’s why my legs are so sore post-race! Around 6 miles in, I ran down into a wash where I found the first of 2 aid stations. I was running with two water bottles and some Honey Stinger chews in an Amphipod belt, so I cruised by, turning right to climb on to a frost-covered trail. The trail eventually lead back down to the wash, which offered a mile and a half of flat, beachy  sand. At that point I was completely alone in the race. I heard some rustles in the hills and glanced around a few times, remembering the lion tracks at the start. Eventually, the trail bumped back up to the left, and the rise and fall of hills started up again.

At 10 miles, the hills and technical running started to catch up with my legs.  Even in the flat sections, I was entering survival mode. I’d be just hanging on for the rest of the race. At one point, a woman locked in behind me, sticking close through mile 11. I asked if she wanted to pass (the trails were often thin, rocky ditches surrounded by cacti). She answered, “Nope, you’re my pacer, and you’re fast on the downhills.”

“We’ll see how long that lasts,” I mumbled back. By the time we came 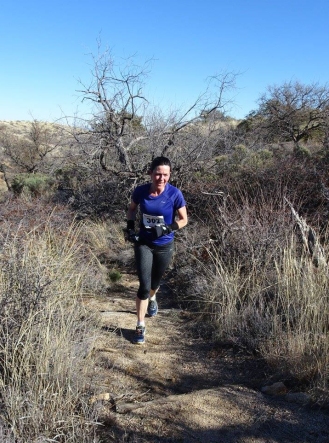 to the last wash, I felt like I was shuffling, just willing my legs move. She passed me at that point, keeping a slightly steadier pace than I could muster. I caught up to another guy in the wash. We’d passed each other a few times, and I felt sure he’d drop me, but he ended up falling back. Finally, the trail dipped down into a small picnic area, and I realized we must be getting close to the finish. I could hear cheering in the distance and determined to run up the last hill. As I came over the rise, I could see the finish line. I was so relieved, I thought I’d start crying. I stuffed the emotion down and stretched out my strides to the 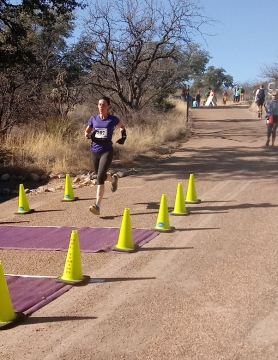 finish. I was beat!

They handed me a finisher’s medal–a horseshoe on a leather thong–and asked if I was okay. I didn’t understand their concern until I saw photos of the finish. I

looked like my legs were going to give out any second! With difficulty, I hoisted my sneaker on the bench so they could cut off my timing chip, then greeted my mom, who had gotten into her role as pit crew, maintaining the fire throughout most of my 2:20 on the trail. After grabbing a drink and banana, I looked at the results and was shocked to see that I’d finished fourth for the women overall. The first three were in their 20s and 30s, and unfortunately, there were no masters awards (40 and over). Still, it was a great event with great energy and something for everyone—from the 10K first timer to the ultra-fanatic.

Writing these play-by-play race reviews reminds me of why pushing my body to its limits feels like a release—everything is reduced to the choices, relationships, and narratives of the experience. A group of runners finds each other based on pace, and they talk about mountain lions, racing, beer, the landscape, and running strategies. Then there’s a stretch of solitude, where the sensations, sounds, and smells take over, where the runner focuses on her movements, assessing the state of exhaustion through each quadrant of the body: mind, legs, lungs, core, arms, feet… And then there’s survival, where she simply thinks about the diminishing time and distance, asking legs and lungs what they have left in the tank. She thinks about things that inspire her, of coaching wisdom, and occasionally her mind wanders, but mostly she just lives in her body and takes in the view when she can. Particularly given the precarious state of the world, I’m grateful that places like Oracle State Park exist–monuments to nature’s diversity, to human care that stretches beyond greed, and to the opportunity that such a place offers to experience one’s limits in the face of the wild and unexpected.

Lucinda is an artist and teacher whose work focused on landscape and place. Bliss currently serves as Dean of Graduate Studies at the New Hampshire Institute of Art.
View all posts by lucindasrunningblog →
This entry was posted in Half Marathon, Uncategorized and tagged half marathon, Oracle Rumble, Oracle State Park, Running, travel. Bookmark the permalink.