Posted on March 25, 2014 by lucindasrunningblog

After my second desert run, up the Catalina Highway toward Mt. Lemmon, I realized that in the Southwest, I would need to carry water for any run over an hour. I’ve never come up with a good solution for lugging water while running. Hydration belts have always seemed a bit ridiculous to me, and I don’t like the feeling of being encumbered by excess gear when running. Still, knowing I was a bit dehydrated after the last run, I decided to stop by Fleet Feet Sports in Tucson to check out the options. After a great conversation with an enthusiastic saleswoman-runner, I walked out with an Amphipod RunLite AirStretch hydration belt. The belt came highly recommended for a few features: moveable parts, a cell phone pocket, and the secure but stretchy and velcro adjustable belt. While chatting about the different hydration systems at Fleet Feet, I asked for local running recommendations, and she raved about Sabino Canyon, adding that I should head out early and stay off the trails, due to the snakes being out early this year.

The next morning I had some work to take care of, so I got off a bit late. By the time I arrived at Sabino, there were swarms of people–locals, tourists, runners, cyclists; it was hard to find a place to park! Still, I was excited to be back. When my sons were young, we lived in Tucson for 6 months while I was finishing up my MFA, and after we had moved to Maine, we flew out for annual Christmas gatherings. As I looked up the canyon road, and around at the young families, images of my sons as little boys flooded back.

As I started running, I noticed bright green cottonwoods, and remembered 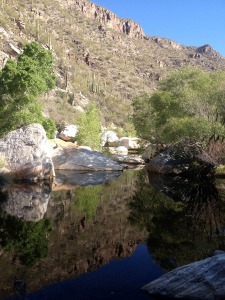 that the winter melt makes the canyon lush with unexpected trees and large pools of water. This also makes it a popular watering hole for mountain lions, though not during the day when the paths are jammed with human activity.

The day was heating up, and my head cold seemed to have sapped my lung strength. I decided, tissues in hand, that I’d still try to complete the length of the canyon road (about 3.5 miles in), but that I would take it very easy and enjoy the sights along the way.

As I neared the steep final stretch, I looked up at a craggy peak and was sure I saw the rocky outcrop shift! It was probably a hiker, but I could imagine a puma up there, taking in the view.

I’m in Tucson helping my mom pack up for a move, and yesterday, she handed me a file of drawings, letters, and report cards from my childhood. The file included a series of short illustrated stories: “The Shark,” The Dolfin [sic],” and “Me,” along with poems about a green snake, a white wolf, and “a little mouse running.” As a young girl, it seems I had lots to say about the emotional lives of animals (they’re lonely, they find best friends, they hide behind trees…), but in “Me,” I wrote: “I really don’t know what to say about my myself…I just moved to burlington and befor that I lived in bakersfield and befor that in Enosburg. Befor that in Cambridge befor that I lived in boston mass. and befor that I don’t remember THE END [sic].” This gripping tale ends with a small drawing of a house. Perhaps there’s a clue in this story as to why I love mobility, and perhaps it’s just more interesting to imagine what it feels like to be a cougar on a rocky outcrop than to figure out what to say about “Me.”

I made my way to the end of the paved trail and took in the view. The air was hot and still, and after a look around and a sip of water, I set out for the mellow run down. As I descended, I could see the crescent moon, faint against the blue above. 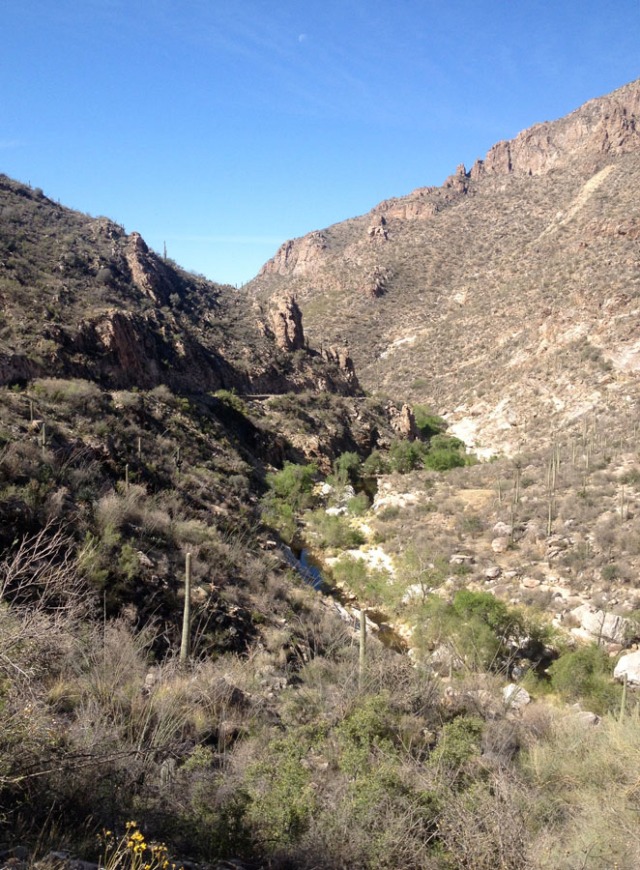 I saw a fair number of runners and a few cyclists throughout the trip, and had to smile at the signage for the hazardous bridge crossings.

This one is a pretty fabulous artistic rendering of the potential hazards of a bike crash.

I made it down to the base, where I met back up with my mom, who’d been walking the lower part of the canyon. She shot a pic in which I look like very much like a tech-loving running geek. I admit it, my advisor from Fleet Feet was right–the Amphipod system is great. During the run, I slid the two bottles to the small of my back and kept the belt at my waist as she recommended. I hardly noticed the gear on the trail, and the bottles were empty when I reached the bottom. The little pocket for my phone/camera (and tissues) was handy as well. 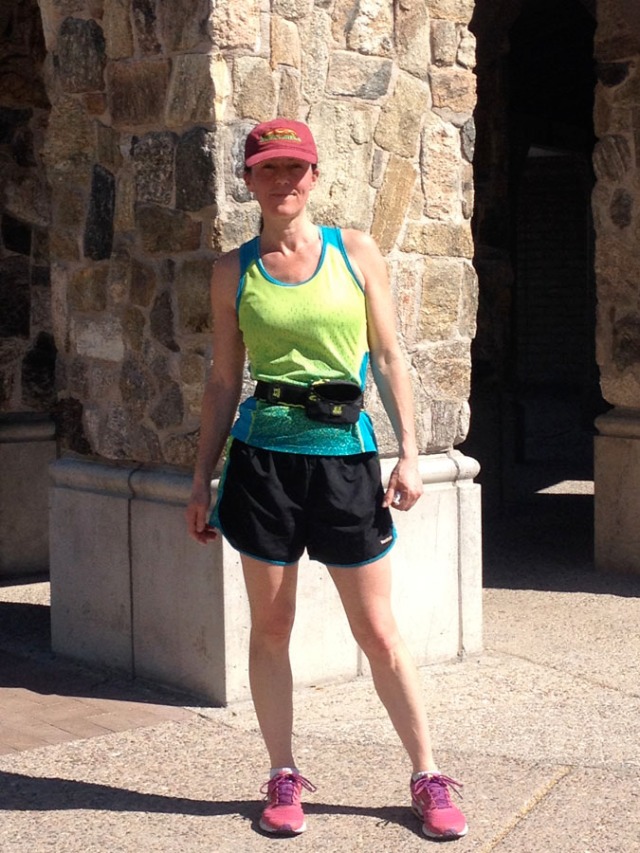 Lucinda is an artist and teacher whose work focused on landscape and place. Bliss currently serves as Dean of Graduate Studies at Massachusetts College of Art and Design
View all posts by lucindasrunningblog →
This entry was posted in Running, Uncategorized and tagged Amphipod, Arizona, Running, running gear, Sabino Canyon, travel, Tucson. Bookmark the permalink.