Posted on April 10, 2014 by lucindasrunningblog 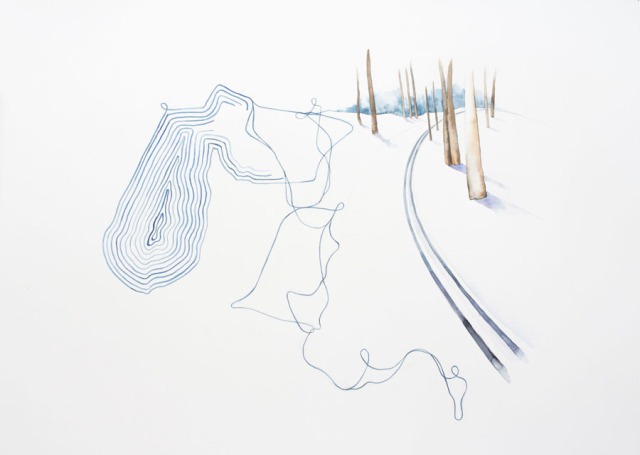 On March 8th, I participated in the Bretton Woods nordic half marathon. As I wrote in My Visual Cue , it was my first Nordic race in 29 years, and I set out to enjoy the experience, not to compete. I have memories of brutal race experiences in high school, at Kimball Union, and I wanted to dip a toe back into the culture without jumping fully into the world of pain.

The majestic hotel set the stage for the race, as we queued up in the fields below. The Bretton Woods Nordic Center grooms 100k of trails, and I was eager to cover 21k of the gorgeous ups and downs.

I intentionally started in the middle of the pack, not wanting to get pulled out too fast. There was quite a bit of shuffling as the pack narrowed down to two sets of tracks. 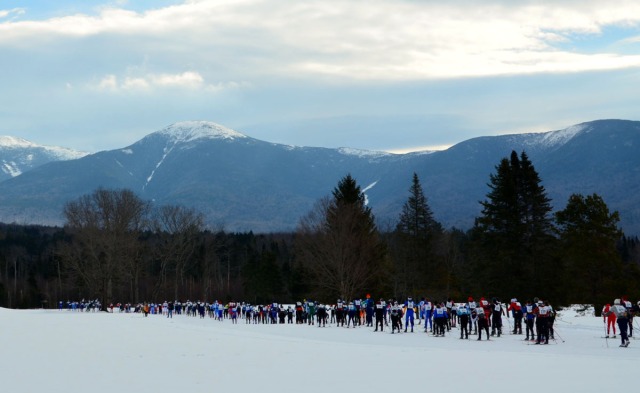 At 4k in, I was having a blast (bib #197), and my wax was perfect, which made the hills a breeze. My form was pretty rusty, but at least I had forward momentum!

The issue of wax was significant in this race. A few days earlier, I’d received the following email with the official Swix waxing recommendations:

If using mechanical grip skis be sure to apply Warm Rocket spray or F4 to Glide zones and kick zones.  Temps will approach freezing and potential for icing in kick zone is high.
Top Coat will be HVC Warm or Rocket Warm.

Panic shot through me as I read. I haven’t raced in a long time, and I couldn’t even interpret the email, much less follow the instructions. I forwarded the message to friend and wax wizard, Rick Chalmers, hoping he could help me relax and come up with a plan. He was sure it would be a klister day, and said,  “Do you see snow in the trees? If not, stick with the klister!” The best skiers can double pole a marathon on rolling hills, but I would need a workable wax that would give me kick. The klister was perfect! Throughout the entire race, particularly after the 12k mark, skiers were talking wax. Some were calling out for waxing help from the edge of the course, manically trying to rub in some hard blue before jumping back into the tracks.  Even though I wasn’t “racing,”  my arms were shot by the half-way point, and I needed to take advantage of the leg strength I’d built up through the running season. That was only possible with wax left on my skis. At the finish, I was spent, but the skis could easily have done the full marathon!

Looking at photos of myself during this race has been an education, and humbling. For some reason, I expected to retain excellent form after 29 years away from the sport. After studying the pix, I have some clear goals in place for next year.

Developing upper body strength and putting in more hours on the trails are at the top of the list. If I’d had the strength, I could have double poled long sections of the trail; instead, I had to save my arms for long, flat stretches. I felt confident on the skis–my ski legs began to come back this year–now I can work on efficient form: keeping my body and arms straight, rather than twisting my body and letting my arms cross over.

As for double-poling technique, I was cocky about that. I’d always been strong in that area, and I thought I had it securely in my nordic toolkit. If that were the case, I wouldn’t be squatting over my skis at the finish! It’s easy to see how much energy I’m wasting by bending up and down, rather than using core strength to propel forward.

I finished the race in a hair under two hours, nearly being lapped by the full marathon winners. Though I was slow, I finished happy and eager for more, which seems the perfect way to re-enter the world of racing.

Lucinda is an artist and teacher whose work focused on landscape and place. Bliss currently serves as Dean of Graduate Studies at Massachusetts College of Art and Design
View all posts by lucindasrunningblog →
This entry was posted in Art, Half Marathon, Uncategorized, X-C Skiing and tagged Bretton Woods, drawing, half marathon, nordic racing, nordic waxing, x-c skiing. Bookmark the permalink.